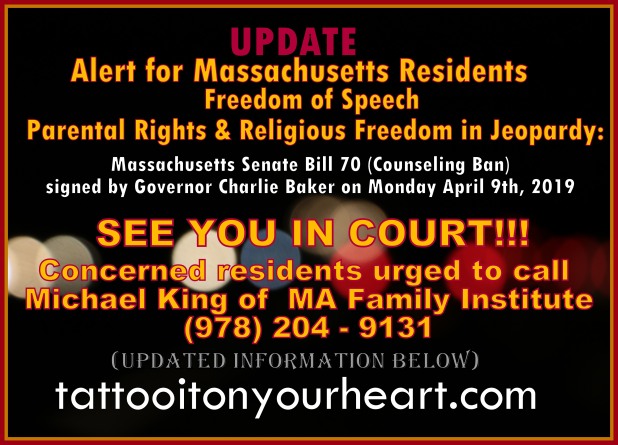 Massachusetts Family Institute is already hearing from potential PLAINTIFFS and is prepared to help them protect their rights in court.

PLEASE CALL or TEXT my cell phone at (978) 204-9131 if you know a minor (age 17 or younger) and parents that want therapy to escape LGBTQ lifestyle OR a Licensed Therapist that desires to give such therapy.

The only way now to protect free speech and access to therapy is through the courts. We NEED your help! 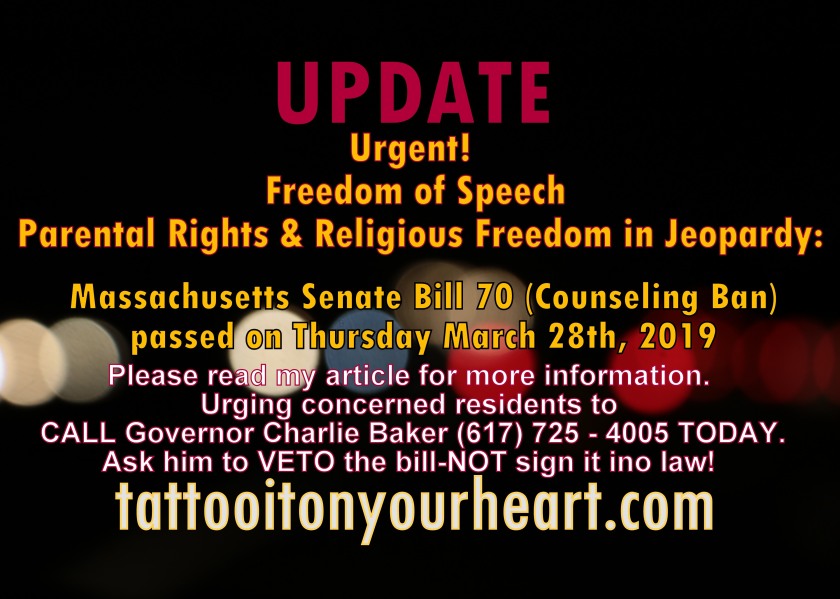 UPDATE Friday 3/29/19:  Unfortunately, Senate Bill 70 passed on Thursday March 28th, 2019 with a vote of 34-0. But I urge you to read this post if you have not already so you can be informed and know what next steps to take to try to stop this threat to freedom of speech, parental rights, freedom of religion and the safety and well being of children. Massachusetts Family institute is urging residents to call Governor Charlie Baker at Phone: (617) 725-4005 NOW and ask him to veto the bill which is set for signing early next week. His office staff informed me today that you may leave a message voicing your concerns after hours and your request will be tallied. *I added more information on the results of the vote and some of my thoughts on them at the end of this article. (A strike-through indicates that information has been updated.)

The Massachusetts Senate  voted on Senate Bill, SB. 70, (the Counseling Ban), this Thursday, March 28th at the State House. If this bill goes into law it will violate freedom of speech, religious freedom, and the rights of parents to raise their children according to their moral and religious convictions. This bill would force counselors and parents to go against their beliefs about human sexuality and violates rights to privacy of patients and counselors.

Some think this bill will not affect them as they aren’t facing the situations it addresses. But regardless of where your convictions fall on gender identity and sexual orientation, and whatever your religious persuasion, bills like SB. 70 endanger the freedoms of all. Other states have also been pushing similar bills.

HB. 140/ SB. 70 would make it illegal for licensed health care professionals to offer counselling or talk therapy that encouraged a gender-confused minor to feel comfortable as the biological sex they were born, or to change, suppress, or stop any behavior or feelings in regards to their opposite-sex gender identity or sexual attraction toward others of the same sex. But they would be legally required to promote hormone therapy and sex-change surgery. This applies even if the minor is the one seeking help to change sexual attractions or behavior they don’t want to continue.

Parents who opt for counseling the state doesn’t sanction for their gender-confused child rather than cross-sex hormones or surgery, would be subject to DCF intervention which could result in the child being taken from their home and then receiving sex-change treatments without parental consent.

This bill mis-labels certain counsel as child abuse and dictates and limits healthcare workers in the diagnosis and treatment of their patients. Prohibiting licensed counselors from guiding those who seek help with their struggles by freely discussing and exploring a patient’s symptoms and feelings is negligent medical practice and abuse. If one doubts a healthcare worker’s advice they can choose to get a second opinion.

Many who identify as one sexual orientation shift to another, or between several categories over time. They change their minds. So why the push to alter one’s body with hormones or surgery? What’s the rush? This is especially true for children who do not yet have the capacity to fully comprehend the choices and their long term ramifications.

If a child identifies as a dog should the parent allow them to undergo treatment to become like a dog?

If a child thinks he is Superman, is it abuse if their parent doesn’t allow him or her to leap from buildings with a single bound?

When my friend’s son was about seven years old he went through a phase where he would drop to all fours and start licking people’s legs. He was convinced he was a dog—but he changed his mind when he grew up a bit. He is currently a 1st Lieutenant in the Army Special Forces, a paratrooper, and is headed to Captain’s School in June. I’m guessing if his parents had hastened to alter him to be like a dog he wouldn’t have the resume he does now.

The prefrontal cortex, the part of the human brain that affects the ability to make sound judgment and rational decisions, is not fully developed until around twenty-five years old. If a child, or anyone else, is confused on a life impacting issue, why would anyone encourage them to make drastic changes, especially irreversible ones that they may regret later? Elective sex-change surgeries, puberty blockers, and cross-sex hormone therapy could permanently adversely affect their life. Why the haste?

But you must make haste if you want your voice heard. It must pass in the Senate and then be signed by the governor to become law.

Massachusetts Residents—please call, leave a message, or email Governor Charlie Baker NOW  and ask him to veto Senate Bill 70. What will be next if we allow this invasion of families and our freedoms to be infringed upon? Beware, because as Laura Numeroff wrote, if you give a mouse a cookie…

UPDATE CONTINUED 3/29/19:  Five Republican Senators voted “present,” instead of voting for or against the bill. State House News reported that “Sen. Vinny deMacedo said he and Sens. Bruce Tarr, Ryan Fattman, Donald Humason and Dean Trano, oppose conversion therapy but have concerns that the bill’s wording is vague and infringes on the rights of mental health professionals.”

Question: Why would they not oppose a bill that that they rightfully acknowledge infringes on the rights of citizens? Vague wording is inexcusable and dangerous in any law. Voting as, “present,” as these senators did is a nice way of saying they did nothing to stop or make a stand against a bill they state has problems. I ask again, why rush to push something through if you know it is wrong, or even partially wrong, rather than work on it until it is right? Some would say if they had voted it wouldn’t have changed the outcome, but at least they would have stood for something. Not voting is a vote for evil.

And how do those that support this bill not understand that it denies minors the chance to receive counsel on the full scope and potential consequences of what they are involved in and the choice to seek help to turn from a lifestyle they may not want? It is truly evil to push children who are not yet equipped into decisions that may be tragically unalterable and scar them for a lifetime.

Once again I say, “God help us.” And Call the governor.

*I will update progress of this bill and any further recommended actions as I become aware of them.

**I encourage you to stay informed as to similar bills in other states.

I welcome polite comments and questions in the designated field below. 🙂

Born and raised in Jamaica, award-winning writer Rachael M. Colby resides in Cape Cod, Massachusetts. Wife, mom, beach bum, artist, work in progress, avid Tweeter—#HealthyFaith Chat leader, Rachael writes to glorify God, encourage believers, and reach the lost. She connects culture’s questions with Christianity’s answers, inspires faith, and motivates through articles, devotions, poetry, and interviews. She has a heart for racial reconciliation and to uplift those who serve in tough places. Her work has appeared on Southern Ohio Christian Voice, Inkspirations Online, the Blue Ridge Mountains Christian Writers Conference Blog, and the Oak Ridger newspaper. She runs on copious amounts of coffee and chocolate. Her WIPs include a compilation of her family’s and others’ stories of their work as civil rights activists (adult and children’s books), and a devotional for writers. You can connect with Rachael on her website, TattooItOnYourHeart.com—a place for seekers, followers, and writers, and on Twitter, Facebook, and Instagram. View all posts by Rachael M. Colby