Congratulations, Ben, on your recent radio play on Christian radio station, 96.1 The Branch.

As of today, Ben has 5 songs on SoundCloud. You can check them out here:  https://soundcloud.com/ben-laine.

That’s quite an accomplishment at 17 years old.

How many songs have you written?

Ben: I have written close to 100 songs in the last six years.

Born in Chicago and raised in Rochester New Hampshire, as the son of a pastor, contemporary Christian singer songwriter Ben Laine’s life has always centered around God. At just 5 years old, The Jackson 5 sparked his interest in music when Ben played a role in the church Christmas play. Ben took to singing, “Santa Claus is coming to town,” after he and his mom changed the lyrics to “Jesus Christ is coming to town,” for the play.  Influenced by his drummer father, Ben started playing the drums at 6 years old. He picked up the saxophone at 9 and piano at age 10. Since then, he has heavily focused on piano, singing and songwriting. Many of his songs are influenced by life struggles and his faith in God. Ben’s music is a pop/rock sound, with heavy piano and rhythmic parts. Through his music, Ben wants to reach out to the lost and give hope to a world in need.

Tell us about your music journey, Ben.

I started off in church concert scenes. Then in 6th grade I won the talent show. In 7th grade, I got the chance to play at my middle school assembly for veterans, with almost 2000 in attendance. The following year I wrote my song, Would You Do the Same? for that very assembly.

Ever since, I have played at the Apple Harvest Festival in October where the streets of Dover are closed down and thousands come to welcome the autumn season. Other places have included local restaurants and a music festival in Rochester.

I’m not exactly sure what genre I like writing. I really enjoy writing music that touches people-  reaches them in a way that other music doesn’t, whether it be about God or just life in general, but mostly God

What instruments do you play?

I play piano, drums, harmonica, guitar, bass and a few others. I also play saxophone in the school band.

What’s your process for creating a song? What comes first- lyrics, or music?

It’s never the same. Sometimes a melody comes to my head, sometimes lyrics, sometimes both.

What are some of your other interests?

I’m in the drama club. I’m playing the part of the beast in this years production of Beauty and the Beast. I run varsity track and cross country. I love summer, anything involving the beach, and any type of outdoor activity, including hiking new Hampshire’s Mountains.

I want to know if you have the goods before I recommend you to my church or my kid. Expand on what you see as problems in today’s culture, the need and the remedy for, “the lost world.” Who is Jesus to you?

Our culture has lost a certain respect for God. I feel as if basic values are also in jeopardy. The Bible says in the end times good will be traded for evil and the other way around.

I feel like love has truly been twisted in today’s society; it barely has any meaning. People use it like it’s just another word; it has lost it worth among many.

Honesty is diminishing. People say the exact opposite of what they believe or do.

Tolerance is also a huge problem as far as the mentality of, “I believe everyone is equal, except for people who don’t agree with my views.”

There are many, many people searching for hope in a world full of war and hate. The only hope you can find is in Jesus. A life in Him is a life full of hope and joy.  People are lost because they do not truly know God.

for all have sinned and fall short of the glory of God.  Romans 3:23 NKJV

Jesus died on the cross so that we can be saved from our sins and set free. All you need to do is give your heart to Him. Jesus is the only way, the remedy for this lost world.

Jesus said to him, “I am the way, the truth and the life. No one comes to the Father except through me.”  John 14:6 NKJV

Jesus to me is a merciful savior. God is so incredible and in no other religion did their god come down and give his life for his people. Christ has really shown me recently the incredible mercy He has on His children. He has given me a revelation of the true love He has for us and nothing can ever persuade me to believe otherwise.

“I once was lost but now I’m found, was blind but now I see”

Some will oppose you and challenge why you want to put your music out there. They will say things like:

“He just wants to promote himself and make money. He should keep his music in his local church instead of trying to become a professional musician. He could get caught up in that and lose the Gospel’s primary focus of preaching.” What’s your answer to this?

I want to put my music out there because God has given me a gift and I want to use it for His name and glory.

God has a plan for everyone. As long as I stay close to God and His will, what he has planned for me will come to pass. As of right now, I really feel that music is a large part of that plan.

Where God takes me, is his choice

It is interesting how some who oppose Christians producing and performing music professionally, still listen to their music. It’s also interesting how some believe if you are talented at a particular thing, it’s okay to pursue a career in some fields, but not in others, even if there is nothing morally wrong with that pursuit.

I’m not undermining the potential temptations in a music career, but people succumb to temptations every day in all sorts of traditional careers. 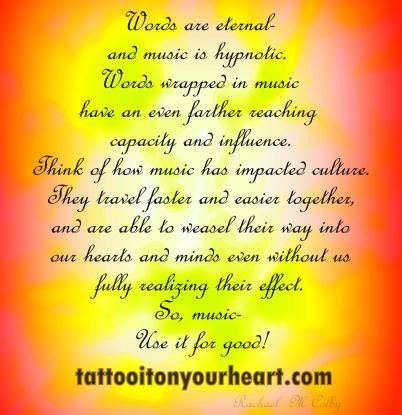 Music is powerful; it is spiritual. The question is, what spirit is behind it. I hear people complaining about a lack of good Christian music. I don’t believe this is true. I think some are just too lazy to spend the time discovering Christian music that appeals to them. Some seem comfortable with, or unaware that they are filling their minds and hearts with music which promotes promiscuity, violence, drugs, hate, discontent, or is just plain drivel. Some say, “I don’t listen to the lyrics; I just listen to the music.” Well, I believe that is even scarier, as then they are absorbing those messages without exercising sound judgement as to what is truth and wholesome in the content. The heart, mind and soul feeds on music. We must be careful what we feed it, as what we listen to influences our mind and alters our hearts.

There is no shortage of musicians using their abilities to evangelize the hearts of many with harmful propaganda, which is why I believe it’s crucial that Christians use their musical abilities not only to worship God, but as a tool to influence by ministering truth.

We need dedicated Christian musicians who hone their craft and  keep their relationship with Jesus current; ones who refuse to prostitute the talent God has given them by selling out to the highest bidder, but rather, are willing to pay the price to impact people with hope and an eternal directive, even though it’s easier, more popular and more financially lucrative to appeal to secular interest. By investing our talents in serving God and people, we store up eternal treasure in Heaven.

Sadly, some Christian artists do get caught up in secular allure, yield to the pressure and water down the message. Many put the Gospel on the back burner, or they let celebrity status inflate their ego, even walk away from their faith. How do you plan to avoid the pitfalls of secularism, worldliness?

Oh, so when someone asks Jesus in their heart, they don’t get an endless flow of happy juice and their life is perfect thereafter?

God does not promise a perfect life when you  ask Him into your heart. But he does promise direction and blessing through times of hardship. Ask and you shall receive, knock on the door will be opened. God is the answer and we can always turn to Him.

Who inspires you musically?  Any favorite bands/ artists?

Growing up listening to oldies like Hall and Oates has influenced my music to be very drum related and syncopated. Today, musically, I really look up to Matthew West. His lyrics have great meaning and he writes his own songs which really stands out to me. 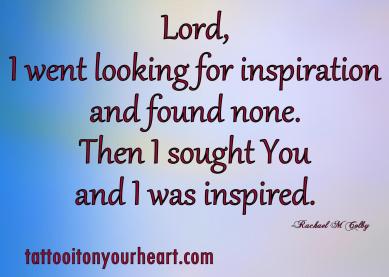 I believe true hope and blessings comes from God. I have seen incredible things done by Him and would like others to experience the same life that I have.

Ben, I wrote this for my son and another good friend of mine who is a musician. Remember this. Always. I’m praying for you.

Here’s the link to check out Ben’s 5 songs on SoundCloud. (More to come.)   https://soundcloud.com/ben-laine

3 thoughts on “A Brighter Day with Ben Laine”

*By contacting by email you agree to receiving communications via your email from Tattoo It On Your Heart and the site's owner, Rachael M Colby and also to accept this site’s use of cookies and its privacy policy stated here: https://automattic.com/cookies

*This site contains affiliate links. If you click on an affiliate link and make a purchase, I receive a modest commission at no extra cost to you.

*As an Amazon Associate I earn on qualifying purchases.*

Shame tried to hold me down, but God said, “Rise!” – Blessed to fill in last minute and share with Coach Mark Prasek on #PJNET Live  about God’s call of “Onward!” and His faithfulness Click HERE to watch the whole show.

“That’s my son!” said Robin an ER nurse on duty as she moved to attended to the 21 year old murder victim. From the depths of unfathomable sorrow, Robin’s voice soars as her faith takes flight and crescendos as grief meets grace and she is comforted by The Creator—and with that comfort she comforts others. A powerful, convicting, beautifully written memoir.

Available on Amazon: The Greater Weight of Glory: A Memoir

First Down Devotions: Inspiration from the NFL's Best (Stars of the Faith)

Freedom of the Song (The Rockwater Suite)

Jesus Revolution: How God Transformed an Unlikely Generation and How He Can Do It Again Today

*This site contains affiliate links. If you click on an affiliate link and make a purchase, I receive a modest commission at no extra cost to you.