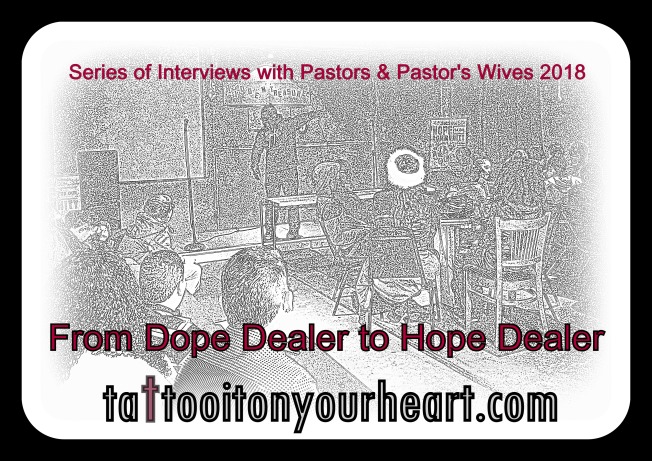 I recently had the privilege of being on an outreach team to help Pastor Pablo and Nicole Catala’s pioneer church in Bridgeport CT. I was struck by how laid down, how wide open and vulnerable their hearts and lives were for God and the people of their city. I watched them love people with the love of God. I watched the ease with which they outreached, their children alongside them—truly a team, like a machine in sync. I took note of their home. Everywhere I turned there were photographs of their family and decor that shouted in unison about God and family. I learned their story later and asked them to share it. Here it is.

Nicole Catala: One night my husband and I were fighting and basically done with our marriage. We both never had an example. We were only 6 months married and wanted to go for a divorce! That night my husband packed his clothes and left the house. The very next day I got a flyer from someone that there was going to be a healing crusade right across the street in Poe Park, put on by Victory Chapel in the Bronx, NY. As I was looking at the state of my life I knew I needed a miracle. I didn’t want my life to be just like the life of my family: Divorced, having multiple children from different men. I decided to go to the first night of the healing crusade. I was in a state of depression at only 18 years old and felt there was no hope for me and my eight month old son. END_OF_DOCUMENT_TOKEN_TO_BE_REPLACED

Did you think when you became a Christian you would be pastoring one day? Tell me about when you realized you were called to be a pastor /pastor’s wife?

Sophie Foley: I always believed I would marry a pastor. But then again, I’ve wanted to marry John since I was 12, and knew he was called to it.

Pastor John Foley: It was something that came to my mind but I wasn’t clear about. I had some other plans. I watched a world evangelism video of Greg and Lisa Mitchell in South Africa and I couldn’t imagine doing anything else. I responded to a call to preach. I still wasn’t sure but a man in the church told me if I wanted to I probably was. I felt

moved that God could use my life to make an impact by preaching to people around the world. I thought most people felt like I did. I dedicated my life to becoming a pastor but it didn’t happen for another 8 years or so.

Sophie: We arrived in Malden, Massachusetts on June 2, 2017. We promptly began Bible studies in our home and soon moved to a hall nearby and began having Sunday morning services. My husband, Pastor John, met a group of young men almost immediately, who had been praying for a young pastor for a year. That same week we met a woman and her adult children, who had been praying for a young church as well. Within a few weeks, we had 20+ people attending. It was mind blowing. Truly, God had a people here, He just needed someone to come.

We remodeled and moved into our current building in May of this year and have had such favor with the community. This really has been a dream come true, to serve God here. It is right in the heart of the new downtown development and one block from the T station. We run anywhere from 20-60 people at any given time. —The Potter’s House, Malden MA https://www.pottershouseboston.com/

Janet Foley, (Pastor Kevin Foley’s wife & John Foley’s mother): My parents were faithful Methodists, very active in the church, my father teaching the adult class and my mother 3rd and 4th graders, me in the youth choir, etc.. But we never heard the term “born again,” and never heard that we must repent of our sin and truly invite Jesus Christ in to our hearts, which caused a lot of problems in our home!

My parent’s marriage was rocky. I got in huge fights with my dad where he accused me of things I never ever thought of doing. Just because I had incense in my room I was accused time and time again of drugs and lying. Finally I said to myself, if he thinks I’m so bad then…I’ll be bad!!!  Where’s some dope? I became a rebellious pot smoking hippie chick at 13 years old. My 21 year old boyfriend turned me on to LSD—I didn’t want to do it, but I didn’t want to hurt his feelings. I was intrigued with the music, yoga and philosophy my brothers brought home from college and the partying, flower children, and concerts of the time.  END_OF_DOCUMENT_TOKEN_TO_BE_REPLACED